How to spot a Twitter user with a ‘Fake’ Follower Count.

‘They’ have thousands of followers, they adorn themselves with Bio’s which are occasionally obscure but often that of a self proclaimed Guru …and of course you’ve never heard of them before. Should you follow them? Seems reasonable to think that IF they have tons of people following them they MUST be legitimate, right? *cough*. I have been observing various Twitter users for the past three months who offer little value, but do know one thing above all other skills they possess …how to manipulate their follower count to get ahead in Twitter.

We’re following you because… ummm… everyone else is…!

Unfortunately Twitter has no system (yet) for other users to ‘rate’ profiles and in the absence of such a system, credibility is for the most part distinguished by ‘how many followers’ someone has. The people I’m referring to in this post are the Twitter users who have discovered how to artificially increase their follower count. Read on and I’ll show you one of the ways you can spot a ‘manipulator’ simply by looking at the historical growth of their account.

Please note: I’m not in the business of naming people I’ve observed. There are no rules on how to use Twitter so technically speaking these individuals aren’t doing anything wrong per se. I even follow quite a few of them simply to observe behavioural patterns.

He’s not who you think he is:
As an example, one of the most "popular" Twitter users in Australia also happens to be one of Australia’s most infamous convicted spammers. Clearly people aren’t aware of his past when they follow him (he obviously doesn’t advertise this fact on his profile). Ironically as he started his Twitter climb to the top in early December he bragged about how he would accumulate a mass following in Twitter with ease, which of course is not that hard when you see ‘how’ below.

How?
The way this individual and others like him amassed followers so quickly was simply by regularly following as many people as possible (within the limits) and un-following anybody who did not follow back. This keeps the follower-to-following ratio roughly in check.

If you were able to break down the first few thousand followers for these people you would see the large proportion are simply ‘return follows’. I believe that a critical mass is eventually reached (usually above 5,000 followers depending on location) at which point organic follows start to occur. This is because making the top lists in sites like Grader, Twiterholic, Alltop lists etc ensures that a profile with lots of followers are ‘promoted’. Whilst many agree that retweets are the most authentic way of attracting more genuine followers, being on a top 100 list will make sure your follower count continues to rise rapidly regardless of content quality or authenticity.

Recently scripts have appeared in the public domain that auto-follow and un-follow as above. An example of one of a person using scripts is shown in a graph below, and we can see how this particular individual has amassed over 35,000 followers in just a few weeks. I am not providing locations to these tools for obvious reasons.

– Ash from www.BannerBlog.com conducted an experiment where he manually followed 1000 people and un-followed them all a few days later. The net effect was he gained 350 followers. here

– @AmyIris wrote a python script to mine names from Twitterholic.com and follow/un-follow which produced similar results to the above.

– @danzarrella‘s site www.retweetability.com analyses whether or not a profile offers value based on tweets to retweets over followers. I have tested various people I thought were likely to have been manipulating follower counts and they tended to score lowly in this index. (Note this should not be taken as rule of thumb – highly conversational tweeters will also score low on this index).

How to spot a Twitter Follower Manipulator:
Disclaimer: To be used as a guide only. There are always exceptions when looking at statistical data.

Step 1: Visit http://twittercounter.com
Step 2: Type in the username you want to analyse. Select the three month period to examine.
Step 3: Watch for tell tale signs in their graphs as shown below.

A normal twitter user has the marked pattern of a steady growth. variations are rarely significant. 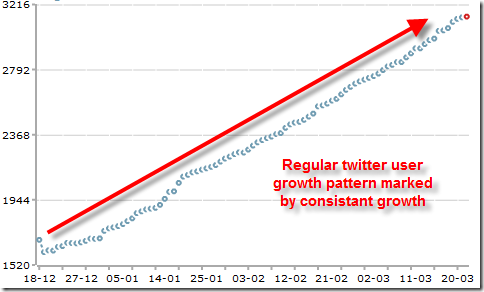 Below: You can see that even celebrities follow a similar growth curve although a slight "J-curve" is evident. Despite the follower traffic being on a much larger scale the variations are still minor. (Note – @stephenfry’s curve contains several unusual jumps but these have been attributed to large scale UK media coverage).

Manipulated Following Pattern:
Below: The following user has a marked number of days where there have been unexplainable spikes. (No evidence of Retweets or any other source explains these spikes in this instance). You can see where the true line of growth has been manipulated by mass following other users. The result is a significant jump in people ‘following back’.

Below: An example of mass manipulation by a Tweeter using scripts to increase their following to incredibly high levels in a very short space of time. These sudden jumps are a characteristic marker of follower manipulation.

Notes:
It is harder to see anomalous jumps in older twitter accounts. There are also exceptions that will cause spikes and jumps, but spikes can usually be attributed easily to a source such as massive retweets, or publicity/media.

Conclusion:
I expect to see an increasing trend in this kind of activity in the coming months as Twitter grows. There are many people who will equate a large following to something they can benefit from. Hopefully as Twitter matures as a platform, it will be harder to manipulate followers. Maybe a rating system would allow people to find great people to follow as an alternative to ‘follower mass’ alone.

Final word:
It’s up to you who you follow, but if you find you’re getting little value from this new breed of "successful" Twitter user, the best advice is to simply ‘un-follow’. You may also want to consider using www.socialtoo.com which has an interesting blacklist feature in development.

This entry was posted on Sunday, March 22nd, 2009 at 9:01 pm and is filed under fake, Nerdy, Social Networks, twitter. You can follow any responses to this entry through the RSS 2.0 feed. You can leave a response, or trackback from your own site.

145 Responses to How to spot a Twitter user with a ‘Fake’ Follower Count.