Update – this campaign has been confirmed as a FAKE (here)

I spotted a tweet (here) from @danteteam a few minutes ago which is the Twitter account for the new game Dante’s Inferno (here). The game is said to be controversial, so I was quite interested when they tweeted an image of people protesting about the game.

Now I can’t quite figure this out. There are also a lot of images on the official Facebook page (here). It’s either a marketing stunt set up for E3 (yes the protestors look a little stereotyped) or a brand being very honest allowing very anti-brand statements to be published freely through social channels. Maybe no news is bad news when promoting a controversial product but I wouldn’t think ‘Electronic Anti-Christ’ would be something EA would actively sponsor.

If this was not a PR stunt then this is the first time I can think of that a brand has shown a negative image of itself using its own social channels. 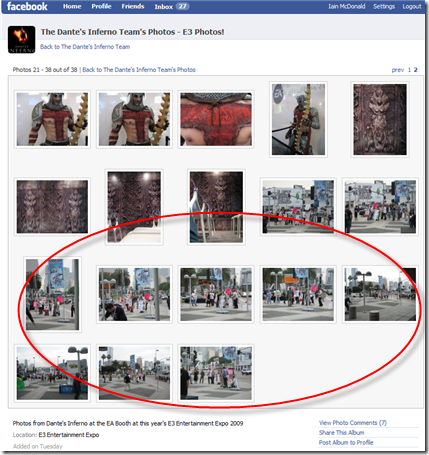 This entry was posted on Thursday, June 4th, 2009 at 11:22 pm and is filed under Digital News, Game, marketing, Nerdy, Research, social media, Social Networks, twitter, viral, Xbox. You can follow any responses to this entry through the RSS 2.0 feed. You can leave a response, or trackback from your own site.