If you have kids and a tablet you know that your kids love them and you hardly get any time with it yourself.

Disney is going to release their Appmates toys next month and then you won’t get your tablet back at all from your kids.

So what is Appmates? It seems to be a new iPad interface which lets the user (or small and big Kids) control a Cars-themed iPad games using the toys above.

The toy cars have special conductive pads that are recognized by the iPad and interpreted by the app. 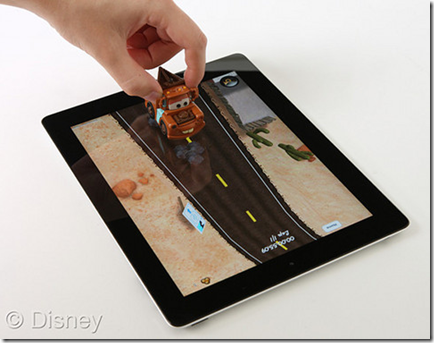 As you drive around the virtual environment of Radiator Springs, you’ll hear the character’s voice react to each bump or jostle. Mirrors inside the toy car will reflect light from the iPad through the toy’s headlights, and Mater’s siren as well.

Check out the video after the break

The game is open-world, with no explicit goals except to explore and earn coins. Coins can be used to unlock new equipment, like tires that leave unique tracks, and fuel that releases colourful clouds as you drive around.

The cars will be sold in packs and start at $20 – in October you should be able to pick them up in your Apple store around the corner.

This entry was posted on Wednesday, September 28th, 2011 at 11:28 am and is filed under apple, Cool, Mobile. You can follow any responses to this entry through the RSS 2.0 feed. You can leave a response, or trackback from your own site.

One Response to Disney’s Appmates – the future of iPad gaming