Touch me and I can see

That is the basic model behind the wearable camera that blinds a user until he is touched by someone else.

The project was created by Artist Eric Siu and is called Touchy. 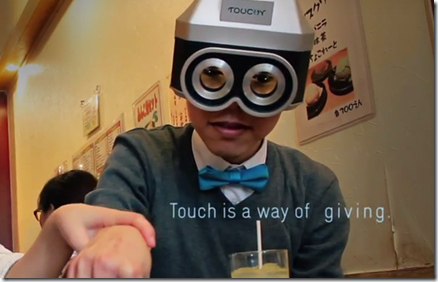 With Touchy, Siu wants to highlight social anxiety, which he believes is caused by the increased reliance on communication mediums like Facebook and Twitter. He says that the helmet emulates the isolating experience of over-reliance on social networks, and turns the wearer into a social device.

Touchy has two giant shutters that remain closed without human contact. Once the helmet’s sensors detect touch, the shutters open and illuminate the wearers eyes, the blindness is temporarily lifted until the connection is broken. If someone maintains contact for ten seconds, a photo is taken by the camera mounted on the front of Touchy, which is then displayed on a screen round the back.

Check out the heartwarming video below

This entry was posted on Tuesday, May 8th, 2012 at 9:27 am and is filed under Creativity, technology. You can follow any responses to this entry through the RSS 2.0 feed. You can leave a response, or trackback from your own site.

One Response to Touch me and I can see