Is Razorfish becoming synonymous with cycling or is France simply a perfect place to see from two wheels?

As creative thinkers from around the globe flock to France’s sunny southern shores for the 2013 Cannes Lions International Festival of Creativity, Razorfish, alongside Adobe and The Weather Channel, will be two-wheeling through the city in homage to the land of the Tour.

This comes less than six months after Razorfish’s #UseMeLeaveMe tweeting bicycles made their début at the South by Southwest festival in Austin, Texas. 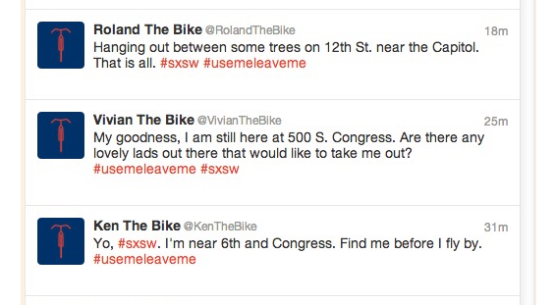 At that time, people navigated their way around Austin’s crowded streets using Razorfish’s GPS enabled bicycles which tweeted out their real-time locations using the #usemeleaveme hashtag. Each bike had its own name and cheeky personality, something which shone through with every tweet.

This time around, riders will be left to their own tweeting devices and no bicycle will attempt courtship on their behalf, however with multiple routes and pace options available (not to mention the accompanying mechanics and tour guides), this tour of Cannes should prove likewise unique.

Everyone is invited and if you are lucky enough to join the party, say hello to our very own Head of Strategy Ben Hourahine, who will be donning his Lycra to represent the Sydney office. 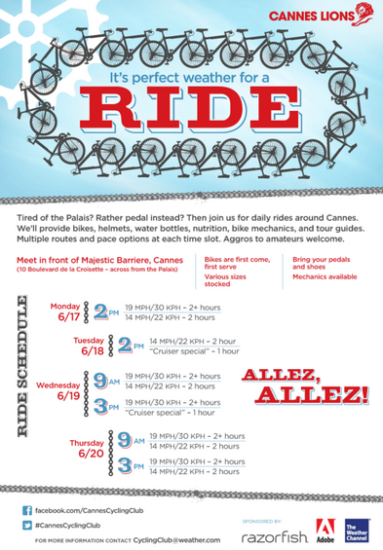 This entry was posted on Thursday, May 30th, 2013 at 3:40 pm and is filed under General. You can follow any responses to this entry through the RSS 2.0 feed. You can leave a response, or trackback from your own site.

One Response to Cannes Cycling Club