iPad vs Kindle vs Rock

So how does an iPad really stack up against its competitors? We did a quick analysis and compared it with the Kindle and a ten thousand year old rock. The results are in:

Sidenote: Just for fun ok! Also full respect and homage to the original iPhone Vs Rock parody from a few years ago (author unknown) here:

The Internet Built My Cable Organiser

Something that has always bothered me about my MacBook Pro is the power cable. Sure, it has those nice little hook things to wrap the “small” end around, but what if you use the extra long power cable? You know, the other that it actually EARTHED so you don’t DIE? That can only be wrapped loosely around the power pack so it can later uncoil and suffocate the contents of your laptop bag.

Happily, I saw the PowerCurl on an Apple blog the other day and ordered it immediately.

Even more interesting than the product itself is the site that birthed it.

Quirky is a “social product development” community. Users can pay to submit an idea for a product which is then evaulated and refined by a larger community. If the product gets enough love, then it goes into manufacture with a percentage of profits going to all the users involved.

Check out  the “quirky in 30 seconds” video:

So I’d like to thank Jeff Scholen of Atlanta, Georgia (and a cast of several dozen others) for the PowerCurl. 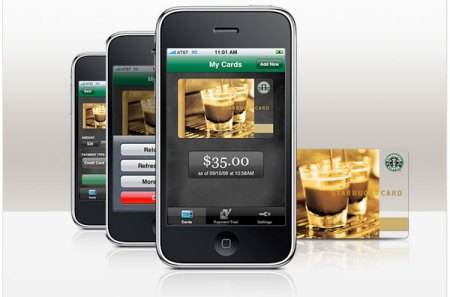 Starbucks is testing their new iPhone app that lets you pay using just the Starbucks Card Mobile app on your iPhone/iPod touch. Just enter your card number and your device will display a barcode you can use the same way as your Starbucks Card to make a purchase.

The app is currently being tested in Starbucks stores located in Seattle, WA, Cupertino, CA and Mountain View, CA, conveniently, the homes of digital powerhouses Microsoft, Apple and Google, respectively.

This app is an example of a revolutionary convergence between your wallet and smart phone. As well as a brand intersecting technology to shape consumer loyalty programs. Now the stage is set for Starbucks to employ an innovative digital couponing program. Stay Tuned.

Are Your iPhone Apps Phoning Home?

I-Phone-Home is a new website dedicated to reporting on iPhone apps that “phone home”, or contact the developer over the Internet, without your consent or knowledge. In one case, it was determined a fairly popular app was phoning home to the developer with your phone number…

Disclaimer: Amnesia Razorfish in no way endorses the jailbreaking of iPhones.

Check out this awesome video of the amazing Apple Keynote from earlier this month, edited down to a relentless stream of Jobsian hyperbole.

A great little augmented reality app for the iphone 3Gs that points you to the nearest and best places to work.

Launches in London soon, then San Fran. Expected to be a global service by late 2009.

Ghostly Discovery – Music discovery based on your mood!

This is awesome! Great music, great UX. Check it out.

A streaming radio station and mood-based music discovery tool, Ghostly Discovery is a free app for the iPhone and iPod Touch that lets you listen to the Ghostly International and Spectral Sound catalogs (full songs, nothing less) and share your favorites with friends.

Soo cool – a live feed wall of over 3000 popular iPhone apps pulsating each time an app is downloaded.

& make sure you watch the videos.

Eliss is a multitouch game for iPhone and iPod touch (available at iTunes store).

Keep up harmony in an odd universe made of blendable planets. Touch-control multiple planets at once, join them together into giant orbs or split them up into countless dwarf planets, and match their size with the squeesars.

I haven’t played it yet, but if the video is anything to go by it’s a must.
Nominated for an IGF Award ‘Innovation in Mobile Game Design’

Yesterday, Apple released details about the upcoming iPhone OS 3.0 which adds a bunch of new things iPhone owners have been asking for… but leaves a few out.

The next version of the OS, which will arrive mid-year will offer developers “over 1000 new APIs” to work with.

Highlights of the feature-set include:

Sadly, the capability for applications to run in the background and (official) video recording using the camera is still out.

TUAW.com have a feature round-up here.

Apple have also released a video of the full presentation here.

The Onion News Network is reporting that Apple is preparing to release their new product dubbed the ‘Macbook Wheel’. It’s set to revolutionize home computing and make keyboards a thing of the past. Mac fans should get their hands on it within the next three to eighteen months!!

Augmented reality on the iPhone

Augmented reality used to mean complicated computers that required users to wear goofy looking helmets. Thanks to the latest mobile devices with high speed cameras and powerful processors, augmented reality is within the grasp of your hand.

Artoolworks is a company which has developed software for apple’s iPhone device which superimposes 3D objects onto real-time video. Moving the iPhone sends signals to the software and in turn moves the virtual imagery. While the current software is very basic, eventually the company hopes to be able to integrate this functionality with far more sophisticated things.

“Wouldn’t it be great if a whole font catalogue would fit into your shirt pocket? If you could find a typeface without knowing its name, just by comparing its shapes? If it were possible to e-mail the marketing department your desired typeface for a client presentation while still at the airport?”

FontShuffle is a new application developed by FontShop and Metaquark for the iPhone and iPod Touch. It offers a new way of finding and comparing typefaces, and of composing text samples. The software combines the knowledge of the analogue world with new advanced possibilities of the digital mobile world.

There shouldn’t really be any surprises for anyone who own an iphone or iTouch.

and i won’t bore you with all of the lists, but here are my favourites:

1. BeejiveIM made it to #2 on the top 10 paid social networking list
I am not surprised that it’s there because it’s pretty good, but it’s 16 bucks – people must have too much money

2. “Units” made it into the top 10 for paid and free apps – I know its 2 different programs but why would you pay for something that does the same thing as a free app?

3. “TouchScan”, a 99 cent application that “scans the mind of two people at once and compares the brain waves recorded” by way of a fake on screen fingerprint scanner makes it all the way to #6 – it makes me cry

you can see them all in iTunes if you want.

Is the iPhone getting Flash?

Apparantly when the iPhone launched, Mr Jobs wasn’t happy with the performance on the iPhone’s ARM11 processors. Neither was he happy with the feature set of Flash Lite. What he wanted was “something in the middle”.

Adobe listened and this week at the Flash On The Beach conference, Adobe confirmed that an iPhone version of the Flash player is in development.

It’s not known when or even if the application will see the the light of day as Apple most likely in control of the release.

Hopefully Steve will like what he sees and we’ll see something soon.

Read the full story at TechCrunch

Not sure where this came from but Rock 1.0 is stacking up pretty well against the iPhone 3G according to this chart. LOL.

Haven’t had time to read the avalanche of press about this thing, but I did really enjoy this promo for it.

Methinks T-Mobile is having a bit of fun at Apple’s expense. For what it’s worth I don’t think ‘funnest’ is a real word either.

The Most Realistic Unboxing of All Time

Oh, man this made me laugh.

I’d say our Surface tables were easier to open than this and we needed a crowbar.

In the eleven hundredth iPhone post of the day… Fair enough, we’re all pretty sick of hearing about what this miracle device can do. Short of curing cancer there’s not much the little bugger can’t cope with; heck, maybe it can cure cancer if someone builds a Folding@home application (FoldingOnPhone?) for distribution via the AppStore… (The uninitiated can read about Folding@home here.)

As cool as all the technology is, what’s ultimately more important for us digital marketing folk is the viability of the platform when it comes to content distribution (both in pay-for and free categories). Sega’s Super Monkey Ball has just hit the 300,000 mark which, at AUD $12.99 a pop, is a considerable lump of change. It’s enough to make Sony and Nintendo sit up and take notice, particularly as their respective platforms (PSP and Nintendo DS) rely predominantly on physical media for content distribution. Sega US’s President Simon Jeffery agrees. “That’s a substantial business. It gives iPhone a justifiable claim to being a viable gaming platform.”

The phone may not have the controls required for traditional gaming but the quality and responsiveness of the touch screen and accelerometer could do for the mobile games space what the Wii has done for console gaming around the world.

So how do we take advantage of this? As iPhone and iPod touch sales continue to rise, distribution of free, engaging, branded content is an obvious winning formula. Carling’s iPint application is catching on like wildfire and given the size and scale of the application the development overheads would have been low. Investing in development for a platform owned and operated by one company might be a little uncomfortable but these days, shifting focus away from Apple in the digital landscape isn’t a wise move: Apple has proved that, technology aside, the iPhone is a viable distribution platform.

Bad news if you were saving up the $999.99 to buy Armin Heinrich’s “I Am Rich” iPhone Application as Apple have decided to remove it from their App Store.

From the application’s description page:

The red icon on your iPhone or iPod touch always reminds you (and others when you show it to them) that you were rich enough to afford this… It’s a work of art with no hidden function at all.

Enterprising bugger is Mr Heinrich. Rumour is he sold a few of these before it vanished.