Google to the rescue–simple flash to HTML5 conversion

OK OK that might have been a not quite true statement (yet), but the google labs have a little tool called swiffy that converts Flash SWF files to HTML5, allowing you to reuse Flash content on devices without a Flash player (such as iPhones and iPads).

Swiffy currently supports a subset of SWF 8 and ActionScript 2.0, and the output works in all Webkit browsers such as Chrome and Mobile Safari. If possible, exporting your Flash animation as a SWF 5 file might give better results.

check out the 2 different animations here: 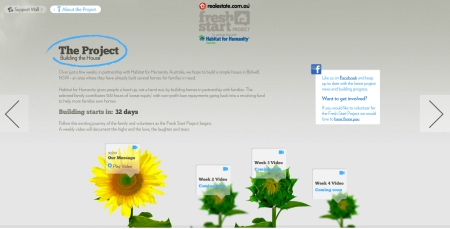 “We wanna make this digital” is the cry of many a client when they enter their ‘digital’ agency with a shiny new TVC and poster under their arm. Too many agencies will take a client’s TVC (and money) and make it ‘digital’ simply by putting a browser around it or sending it’s animated cousin off to Double Click.

I’m proud to say that’s not what we do here at Amnesia Razorfish. When our client, realestate.com.au, shared their really nice ATL spring campaign with us, we got really fired-up by the challenge of making this campaign come to life in the digital space. We didn’t want to simply TELL consumers that realestate.com.au helps give people a fresh start, we wanted to actually GIVE someone a fresh start. Some one that really needed a fresh start.

Say hello to The Fresh Start Project from realestate.com.au.  The aim of the campaign is simple. Build a a new home, for a family in need, through people’s use of realestate.com.au. As users interact with realestate.com.au they collect ‘bricks’ which they can donate to the 1 million brick target. In partnership with Habitat for Humanity Australia, the house will be built. There’s no augmented or virtual reality here. Sure – it won’t cause world peace, but it will make a real difference to a real family in real need. And that’s why I love this project so much. Hope you do too.

END_OF_DOCUMENT_TOKEN_TO_BE_REPLACED

Kevin Lynch, CTO of Adobe responded to Steve Jobs’ ‘Thoughts on Flash‘ open letter (summary here) with a short blog post late last week.Kevin writes that if Apple tried to cooperate with Adobe a bit more, then they could “provide a terrific experience with Flash on the iPhone, iPad and iPod touch”.

However, as we posted last week, given the legal terms Apple has imposed on developers, we have already decided to shift our focus away from Apple’s iPhone and iPad devices for both Flash Player and AIR. We are working to bring Flash Player and AIR to all the other major participants in the mobile ecosystem, including Google, RIM, Palm (soon to be HP), Microsoft, Nokia and others.

First off, you’re going to need to look at this picture, and think about how awesome it is. If only for having one of the best old school Nintendo super teams ever formed, lined up there at the bottom.

Now consider this, you’re about to play through some good ol’ Super Mario Bros – which of those characters would you choose to play through with? Honestly, I need look no further than Mega Man (or Rockman for you purists) – but you might have a different opinion.

The final step here, is to find Super Mario Crossover (which I have helpfully provided a link to) and then go fulfil your nerdy dreams.

The developer has done a really fantastic job here, with Mushrooms and Fireflowers providing perfectly adapted powers for each character. Can’t recommend this enough as a nostalgic, Friday afternoon time waster.

Today, in an open letter published on Apple’s website, Steve Jobs shared his thought on Adobe Flash and its place (or lack thereof) on Apple devices such as the iPod, iPhone and iPad.

Steve’s “Thoughts on Flash” can be found here. I break down his points after the jump.

END_OF_DOCUMENT_TOKEN_TO_BE_REPLACED

“I had the pleasure of diving headfirst into Silverlight in building the Victoria’s Secret Fashion Show. I walked in with the same sort of attitude that I believe is prevelant across the industry at the moment — Silverlight is an inferior platform, that we were working with a Flash wananbe and that this would be to the project’s detriment. Why use Silverlight when I can already know Flash so well? It does the same things as Flash anyway, right?…”

This is an oldie, but a goodie. Fantastic contraption lets you build contraptions from wheels and support structures in order to reach your goal of getting the pink ball inside the pink rectangle.

We recently rediscovered this game, and spent an obscene amount of time trying outdo each other creating the most poorly designed machines possible. It’s also available on the iPhone. Here are a few of our attempts: 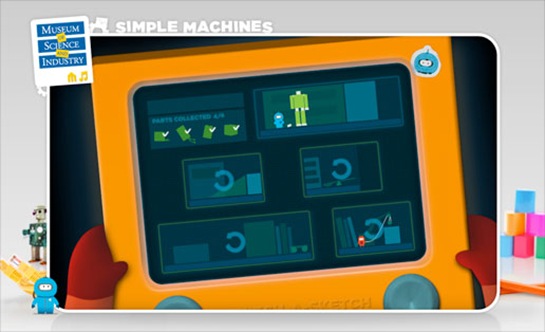 A beautiful game for the Museum of Science and Industry that makes physics fun. I love the way it successfully combines basic character animation with real world objects. Be sure to have your sound turned on because the music is great too.

Original Lynx Effect website (which won a Webby in 2008 created by Amnesia Razorfish) is now in it’s archived glory state in our portfolio. Clean the “Dirty Girls”, tattoo your name on some unmentionable body part – the list goes on.

“SourceBinder is a node based visual developing environment for Flash.

The main idea behind SourceBinder is to give a lightweight framework where open source ActionScript classes and code snippets can be inserted and visually connected together to build custom Flash applications.

Inserted to the framework, the ActionScript classes become instant “nodes” of the visual environment which can be connected together via input and output connectors representing public attributes and functions. Introducing new nodes to the system can be done by anyone, which results a rapidly expanding, community-based development environment.”

If all this seems a bit Greek you seriously need to watch this video to see what it can do.

SourceBinder sample video: creating a globe with atmosphere from Balazs Serenyi on Vimeo.

They were the winners of a Flash Forward Rubber Arrow Award for this piece of coolness. It seriously kicks some major rear. Check out the demo’s as currently it is in closed alpha.

This new site from GE ‘smartgrid’ to promote a greener earth is really beautifully designed, great use of Papervision 3D and a nice touch with the augmented reality (shot below). It’s well worth looking at. Unsure which agency produced this so if you know please post in comments so we can credit.

If you’re in the market for an imaginary friend…

…and don’t want to run the risk of getting RickRolled, print yourself the Papervision glyph and, through the magic of a webcam and piece of paper, he’ll appear out of nowhere on your monitor.

Video is on Vimeo, and source code info and general fun is here.

Tripped over this sweet Flash game this morning. The idea behind Auditorium is to move these things around that… actually, I’m going to let you figure that out yourself. The game encourages jumping in and playing around to see what’s going on.

In the creator’s words:

Auditorium is about the process of discovery and play. There are no right or wrong answers; there are many ways to solve every puzzle. To get started, fill up the first audio level. We hope you enjoy the demo of Auditorium.

Demo? I’ll pay for an iPhone version if there’s one going.

This really is a very cool game. Best played in fullscreen mode which is defaults to. Hit f to force it.

YouTube have gone widescreen with all their content (blog announcement). Some may see this as a strange move given that most content for the site is in 4:3 ratio as default. Unfortunately the problem is that I could not find a video that did not have black bars down the side. So where is all the native 16:9 YouTube content? (Searching for 16:9 does not find much). Here’w what YT says:

“We’re expanding the width of the page to 960 pixels to better reflect the quality of the videos you create and the screens that you use to watch them. This new, wider player is in a widescreen aspect ratio which we hope will provide you with a cleaner, more powerful viewing experience. And don’t worry, your 4:3 aspect ratio videos will play just fine in this new player”

Personally I would think that maybe YT would have been better off detecting what the native aspect ratio is and the have a different template – possibly be a little better in terms of presentation, and a little less impact on users. Content Creators tend to have pride in getting the format and presentation layer correct. The black bars do make all the videos look a little dated.

Yuk… The black bars are EVERYWHERE!!!

The same content embedded does not affect external pages, although I could not see how to embed a widescreen version of the above.

No black bars when you embed… for now.

More aspect issues:
Unfortunately Standard Widescreen cinema works at 1:85 and Cinemascope widescreen is at 2:35 – so videos like the WOW Lich King trailed end up with bars on the top! (here)

As part of a monthly round up of Viral Game releases around the world (good, bad and utterly unplayable) here’s our digest of BRAND NEW releases within the past 30 days – compiled by Amnesia. If you would like to include your game in the next roundup let me know via twitter (here).

Popcorn flicking… Do it from the safety of your monitor…

www.scrapblog.com : I’ve seen a lot of browser based flash ‘applications’ over the years – you know trying to emulate the desktop experience inside a web page… but few have cut the mustard. They tend to be slow, clunky, buggy and miss out on the detail such as keyboard shortcuts. Scrapblog (which you use to put photo albums together) is an exception to the norm and is really quite outstanding. Even CTRL-Z (undo) worked. Go play. Then you can order a 20 page hardback version for about US$35. Pretty good deal we thought.

Or, just go straight to the source: www.lynxeffect.com.au

Is the iPhone getting Flash?

Apparantly when the iPhone launched, Mr Jobs wasn’t happy with the performance on the iPhone’s ARM11 processors. Neither was he happy with the feature set of Flash Lite. What he wanted was “something in the middle”.

Adobe listened and this week at the Flash On The Beach conference, Adobe confirmed that an iPhone version of the Flash player is in development.

It’s not known when or even if the application will see the the light of day as Apple most likely in control of the release.

Hopefully Steve will like what he sees and we’ll see something soon.

Read the full story at TechCrunch 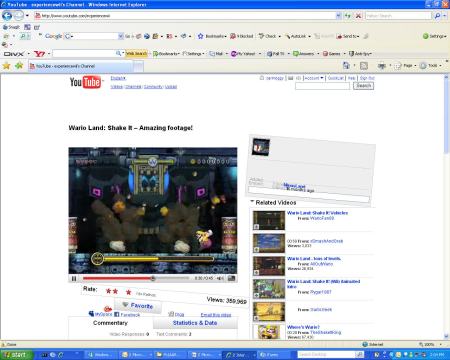 Nintendo and Youtube have pulled off this awesome execution. It’s great to see these kind of deals being done. I don’t know what else to say on this apart from it rocks.