Respect to Kiwi agency Resn for creating some pretty funny hack experiments using the Google Hangout technology. Check out their mind-boggling trailer for the ‘Face Arcade’.

You can enter the Face Arcade here to join the fun.

And remember: you only need a face to play! If you enjoyed it, please show the guys some vote love on FWA.

How would you like to pay for that, ma’am?

Conventional wisdom has it that when someone wants to buy goods, they go to a retailer, purchase a product at a predetermined price, and then become owner of that product. We don’t often think of different ways for this transaction to take place.

But what if there was another way?

END_OF_DOCUMENT_TOKEN_TO_BE_REPLACED

What an amazing kid! which games company is going to snap him up?

I love the calculator authentication bit…

The Fun Pass is an awesome deal!

Remember the days when you were sitting in front of your CRT TV playing with your Atari 2600 playing Asteroids by yourself? I do.

Now that is all in the past as the new version of Asteroids here is a massively multiplayer online (mmo) game and instead of chasing asteroids you shoot other players from all over the world.

It’s a relatively simple arcade-style game in which you attempt to rack up as high a score as possible before running out of lives, and you can sign in with Twitter to put a name to your score.

A bit of a “seize the day lesson” to us all in digital agency land. If I had a dollar for every app / social game that I have pitched or said I was going to make…..

Snake the Planet with urban gaming

Our sister company Publicis Mojo, together with Finch and Mobile Projection Unit (MPU) Sydney have developed and documented a look at mobile gaming – “Snake the Planet”

When ‘Snake the Planet!” is projected onto buildings, each level is generated individually and based on the selected facade. Above you can see that the person is part of the level – pretty cool.

Check out a video of it in action

I can’t wait for some more games to be developed. How about some Donkey Kong?

After the break you can find some more information, videos and photos.

END_OF_DOCUMENT_TOKEN_TO_BE_REPLACED

Really great to see these technologies being combined together, the result is quite beautiful. Nice work from B-Reel London.

Indie Royale – pay what you like with a twist 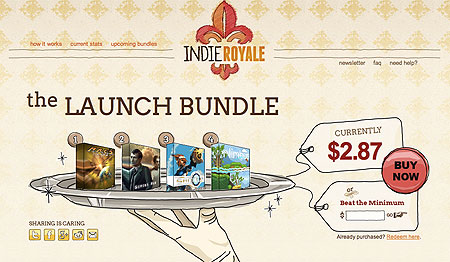 Indie Royale is a new video game bundle site with an interesting twist on the pay-what-you-like model. Every two weeks, the site will release a bundle of independent video games. Users can pay the current marked price, but as more users pay the marked price, the price will slowly increase. Paying more than the marked price, however, will bring the price down for everyone by an amount proportional to the extra paid.

The site is a joint venture of the blog IndieGames.com and the digital games distribution network Desura. They describe the site’s raison d’être here:

The point of Indie Royale is to put the spotlight on those indie titles which provide fantastic experiences, but may well have been passed over by a good portion of the mainstream gaming public. If you purchase an Indie Royale bundle, you can be safe in the knowledge that you’re not only getting four brilliant indie games – you’re also supporting worthwhile developers.

It’s a cool idea and I can see myself coming back every couple of weeks to see what’s available. Between Good Old Games, Steam and now Indie Royale, it’s getting far too easy to spend all your pocket money on cool games.