The biggest projected capacitive display in the world

and I want one.

I finally had the time to read about this “little” screen at SIGGRAPH, the article has been open in my browser for about 6 days.

And it was well worth the wait. 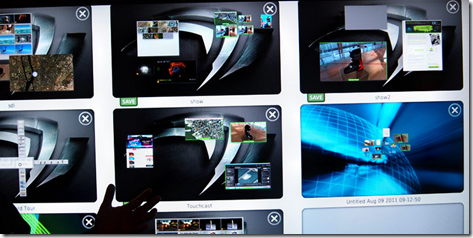 A projected capacitive display is nothing new, multiple smartphones, including the iPhone has one, but having an 82 inch one is something very special.

check out the video below and dream about having one of these puppies in your living room some day.

Right now this kind of screen is still really expensive ($120 000) and even the  CEO said that consumers will see this in the market as soon as it is more affordable.

I am saving my pennies now.

The multitouch desk of the future

We all know that Steve Jobs doesn’t like vertical multitouch, but I think it doesn’t hurt having that as well.

And the guys from Media Computing Group seem to share this opinion as they just showed off a cool concept workspace that is curved. For them this is the multitouch desk of the future.

It holds 2 projectors and 3 cameras and supports 10 touch points at a time. 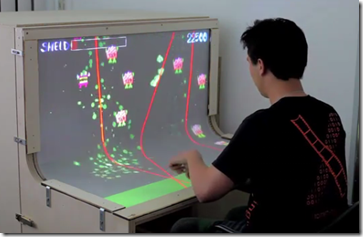 If you thought a Microsoft Surface table was big and spacious then have a close look at this one. I think I will need to build a new office to fit it in.

Xbox Kinect is hitting the market and I pre-ordered the one for the office yesterday. And then I saw this today – someone hacked it for the greater good to bring us gesture based multitouch using Kinect and sitting on the couch.

Yesterday I showed you the future of the DJ mixpult here and today we are getting blown away by this multitouch-enabled rig by a guy called Gregory Kaufman. 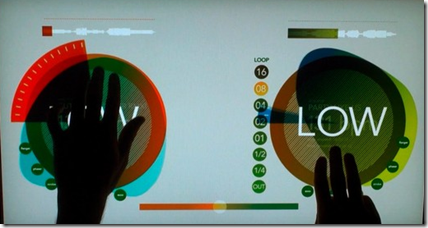 It employs a gesture-based interface that lets you spin the virtual turntables and use a variety of taps and finger swipes to replicate the main functions of a regular DJ deck.

It is even big enough so 2 DJs can play at the same time.

check out the video

The coolest DJ board in the world!

I have a few mates that are DJing and I tell you right now, they would love one of these little screens. 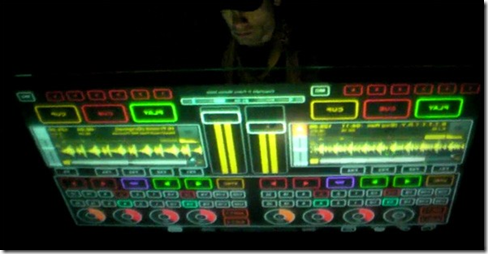 A clear sheet of glass that beams out video from your computer and accepts touch inputs in return, the Token concept has been designed by a guy called Rodrigo from Chile. We know it uses a rear projector for its video, Emulator for Traktor Pro as the DJ software, but not much else.

But let the video talk for itself. 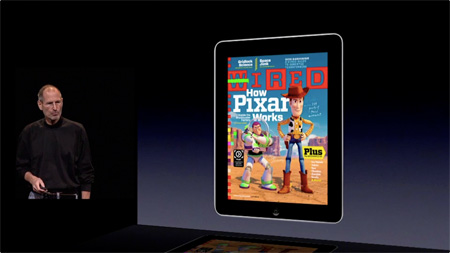 Wired Magazine have reason to be extra excited about the release of the iPad this month. The iPad edition of Wired, which retails on the app store for $US4.99 has – as of June 7 – been purchased nearly 80,000 – the average monthly sales for the print edition. This is after just two weeks on the app store. This was tweeted by Editor-in-Chief Chris Anderson on Sunday:

He celebrated again during Steve Jobs’s keynote at WWDC10 on Monday with:

Obviously, with the iPad still being so new and shiny, app sales are likely to be much higher for the next few months, but even so, things look promising for the Wired app. In addition to getting all the articles (and ads) of the print version, there are extra animations, videos and sound clips sprinkled in there.

Personally, I think the Wired iPad app is amazing. After seeing the Wired app, the whole iPad thing made a LOT more sense. The iPad (to me) is a reading device. Reading blogs, articles, ebooks, magazines. It’s just so much easier than sitting at a desk or having the MacBook burn my lap on the couch. I’ll be happily throwing $6 a month into Condé Nast‘s pockets. Much better than the $13 is costs on newsstands in Australia.

Hopefully we’ll be seeing more creative use of the iPad from other magazine publishers.

In my line of work (and because I love it) I come across a lot of cool gadgets and usually (at least if you ask my wife) I spend too much money on them.

Usually I start these lists with the least and work my way up to the best, but I want to start with the device I really really want this year.

I have been using my 8310 blackberry for too long and for a while there I was carrying around 3 devices to do my phonecalls, emails and browsing and gaming, but the Samsung will be able to do all that.

So why do I want it?

for a start I don’t like the iPhone (don’t get me wrong I think it is a good phone for “normal” users), but it just doesn’t do what i want from a phone.

apart from that here is my  shortlist on why I want it:

I had a chance to play with the iPad for a few weeks now and I have to say I am not impressed – especially since Apple announced the AU pricing for it today and again, Australia gets screwed – all you really get is a big iPod

so what do I want in a Tablet?

END_OF_DOCUMENT_TOKEN_TO_BE_REPLACED

The Courier: Microsoft wants to send you something nice.

We haven’t blogged about this here yet, and given all the tablet-like devices we’ve covered over the last couple of weeks (iPad mania? Maybe.) why not add Microsoft’s possible entry into the fray.

The Courier appears to sit somewhere between a smartphone, PDA, the current imaginings of a tablet and… a book. It may sound odd, but if you can see the picture below, you’ll notice just how enticing this might be to certain creative folk, myself included. 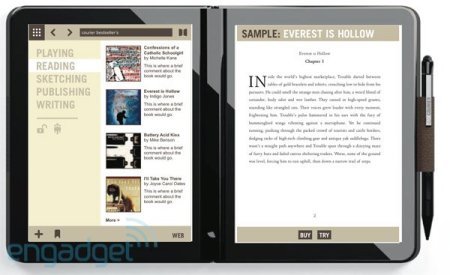 Notice the menu on the left hand page, sketching. Sure, reading, playing, all of that is great – but for someone who loves to draw, and loves to draw on the go, this is some kind of dream come true. It hasn’t come true yet, but it looks to be on the way. This concept is intended for both touch and stylus, recognising (much like this) that touch is great for some things… but for others, it’s honestly best to have another tool in hand.

Not all fancy new devices have to come in iPad/Slate/Tablet form, and the idea of a digital note/sketchbook complete with camera and mobile web capabilities is a fantastic step into an innovative, digital future. Better yet, it should fit in your pocket.

The future of computing

We all have seen Tom Cruise in Minority Report and even though the movie was pretty average, the computing system used in it blew us away.

I have been talking about multitouch before here, here and here but most of them talk about concepts.

Now there is a company called Oblong that developed a system for real and it looks a lot like the one in the movie.

I want to volunteer to test this system, please.

Update: I just read that the cofounder of the company, John Underkoffer, was the lead of the team that came up with the interface used in the movie in 2002.

Pranav Mistry, the genius behind SixthSense, gives a demonstration of the technology and talks about both where it came from and where it’s going.

Recorded at TEDIndia in November, 2009.

Very interesting to see technology that brings the virtual world into the real world instead of the other way around.

From the Emerging Experiences blog:

“Customers are being faced with increasingly complex buying decisions, especially when it comes to technology and services. As a result, increased pressure is being placed on store associates to provide knowledgeable service to customers. Our Emerging Experiences team used this opportunity to develop a solution to demonstrate how an immersive interactive experience can assist customers and store associates with complex buying decisions in a retail setting.”

Using Windows 7, the Razorfish Touch Framework and NextWindow touch screen technology, Razorfone is another example of how multi-touch experiences are going to become a bigger and bigger part of our lives.

Kudos to the Emerging Experiences Team!