we have seen how Nokia wants to bend the future of phones with flexible displays and now Nokias future lab showed us a concept video on how it could all work together.

nanotechnology, with a bendable transparent display and a fully touch sensitive casing are only some of the visions that Nokia cooked up.

Check out the video:

not sure if I agree with all of it, but there are some nice ideas in it.

We have seen bendable displays in the past from Samsung, LG and Toshiba, but none of them have really put it into a functional prototype.

Now Nokia had their Nokia World in London and Tapani Jokinen, Head of Design at Nokia showed off their bendable phone and how it would react when you bend it different ways.

The user will control this flexible Nokia Kinetic phone by bending, twisting and even squeezing it. Different bends will result in different functions on the phone and he had a good point when he said that it makes it much easier to use in the cold winters in Finland when you are wearing gloves.

Check out the video:

It’s great to see some fun uses for NFC trickling through. It’s taken a while though, with Nokias’ first NFC enabled hand set having hit the market in 2006

Nokia have also launched an NFC microsite recently which does a good job at explaining what’s possible:

NFC trials in the world

cute little story about a small town in Finland

For the last few years Google has always stayed ahead of its rivals with products like Google Earth, Streetview, Maps etc but Nokia just launched the Beta of Ovi maps in 3D and it is mind blowing! Every texture is rendered in 3D on every building (for the major cities they have completed) and it is a lot of fun to play with. It’s not often that people in the office gather around a monitor and say “wow”… but today it happened. Well played Nokia – this is really cool. 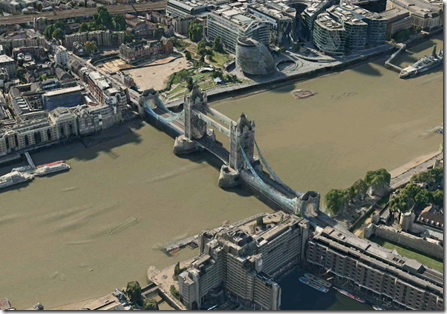 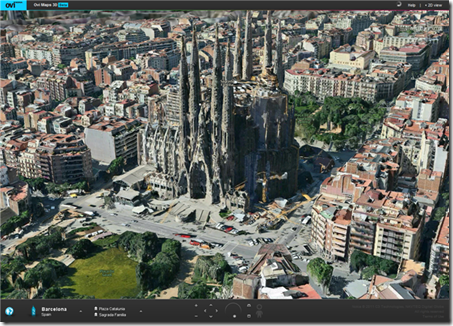 The Fight begins Iphone vs N97 gloves off round

The N97 Finally announced to come into the market is the new phone to challenge the Apple iphone.

Below is the N97’s full list of talents as defined by Nokia.

The N97 has a full kick-out QWERTY keyboard, hidden behind a 3.5-inch widescreen 16:9 touch display that tilts smartly above the keys. Both control methods neatly coexist and are tailored to ensure every experience, be it messaging, social, entertainment-focussed or otherwise, are manageable via the most instinctive physical tool set available. The touchscreen promises to be exploited to full effect, even when inactive, courtesy of a new home screen that automatically sucks in live information via custom widgets sat on a S60 5th Edition backbone.

The N97 enters the fray stomaching 32GB of on-board storage, double that of any mobile device currently in existence, and can take up to another 16GB via microSD, enabling it to become a portable multi-media computer with 48GB in your pocket. Of course Nokia wants you to abuse this space with music, movies, photos and N-Gage games, and as such has worked hard to ensure the N97’s battery is up to the task – it promises to kick out up to 37 hours of music and 4.5 hours of video.

Embracing location based services and the concept of context awareness, the N97 is location-savvy, automatically sensing where it is at any given time via A-GPS. The benefit being that you’ll be able to tap into local services with ease and share your social location with friends minus any extra fiddling or fuss.

It will cost 550 Euros (before taxes and subsidies) when it launches in the first half of 2009. What do you think? Watch the video and leave your comments.

Blogged with the Flock Browser 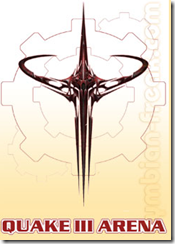 You can run Quake III Arena on those phones and the best part is that you can also run a local server on the phone to and use a Bluetooth keyboard for online gaming.

you can read more here you can also find instructions on how to install it on your phone by scrolling further down the page.

This could be a reason for me to buy a Nokia phone again. 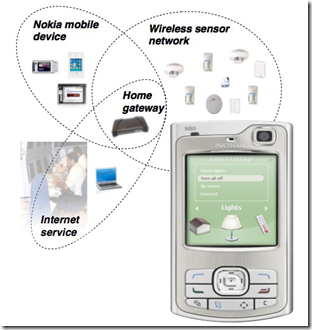 Nokia’s Home Control Center will be the basis for next generation security, smart home solutions and household energy management systems.

The platform is open allowing third parties to integrate their own smart home solutions and services; its core consumer value is the plug and play experience across all solution areas with high security levels built in. All solutions based on the platform can be used through a smart phone or PC locally or remotely. Consumers can monitor and control their electricity usage, switch devices on and off, and monitor different objects, such as temperature, camera, and motion. In future, entire systems within the home can be connected to the Nokia platform, including security, heating, and ventilation systems.

sweet! I don’t even have to get off the couch now 🙂

I held off buying an iPhone 3G, partly because I really like my N95 but mainly because the iPhone lacked a few features I use like video calling, MMS etc. The 5800 MusicXpress is the latest challenger so here’s the first look:

What’s Bad
– Can’t see any multi-touch in use.
– Nokia just don’t get UI as well as ‘others’ do. It’s still clunky.
– No transitions (moving between any content causes page refresh).
– Fonts + Menus still too big! (This phone has great resolution but Nokia just made everything bigger Argh! Nokia… please – when browsing contacts some of us want the option to not have to scroll through 500 pages of contacts when we could simply see more on one page).

Accelerometer Game on the Nokia 5800:

Verdict:
Q: Should I buy a Nokia 5800 instead of an iPhone 3G?
A: If you want heaps of features then it’s a YES. If you are obsessed with having an eye-candy interface then it’s a NO.

The images below may be the single reason I don’t buy a 3G iPhone and stick with my Nokia N95 for a little while longer.

Now I should say that I think the N95 and iPhone 3G are both very good phones. Many Amnesia staff have iPhones, but I’m yet to be drawn in despite beeing a total geek and gadget freak. Why? Now, forget the vastly superior iPhone interface and screen for a second, because they both have similar features (3G, GPS, wireless, accelerometer, + tons of apps for both).

The big problem with the iPhone is the camera. It’s a 2 megapixel camera with no flash, compared with the N95 5 megapixel cam with Carl Zeiss lens. These shots below are taken outside the Amnesia office from exactly the same position with good light. 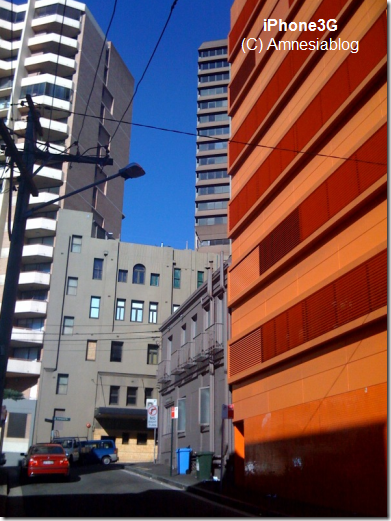 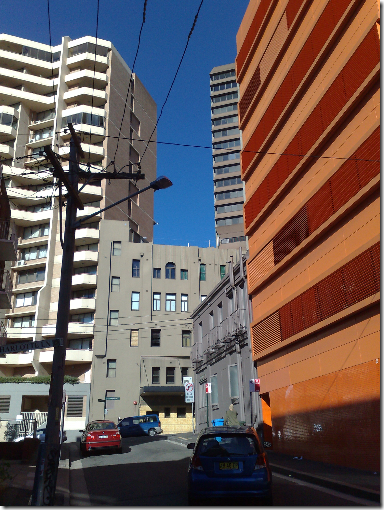 Nokia 95 – Note the much greater field of view than the iPhone.

Now let’s Zoom in on the detail: 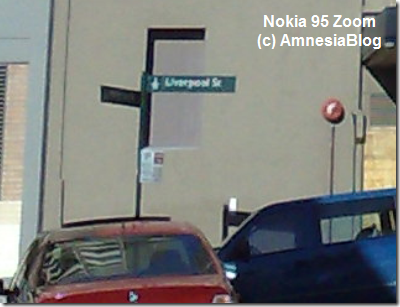 Above is a zoom from the N95 shot. It’s at the point where clearly the compression starts to become noticable, but you can read the street sign. There is detail in the shutters at the side and the red alarm bell on the right is distinguishable. 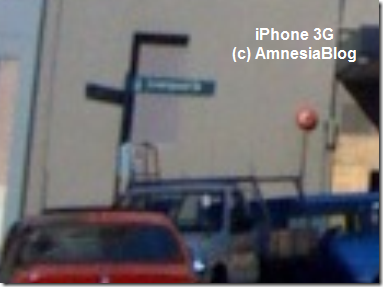 Above is the iPhone 3G. The detail is completely gone at the same zoom level. Not a single letter can be made out on the signpost.

Finally let’s look at the red car the red BMW. Well on the iPhone you can’t even see what brand of car it is, let alone read the numberplate. Good job this isn’t a crime scene.

The iPhone 3G camera in low light is a lot worse – and it’s not an easy camera to hold still whilst you press the button… so pictures in the pub get very smudgy. Admittedly the Nokia N95 flash is pretty ordinary but better than nothing.

So if you want a single device – camera and phone like me, and you want OK shots that you could print later, then the iPhone 3G has a long way to go. The N95 wins by a mile.

Nokia appear to be taking a big bash at the dominance of  iTunes in the local market. With high hopes I tested it out by attempting to download the free single of the week. Unfortunately It didn’t go quite to plan. I’m quite a Nokia fan (since getting an N95) as most people in here know so this held some promise, I’ve also been waiting for a challenger to iTunes (even though I do mostly like iTunes) but I’m afraid it’s not good news…

First you have to register then install the ‘Nokia Media Bar’ – which is not the best experience. I did not really like the intimidating message below “To Play or Buy music you need to install the Nokia Media Bar”

Here’s the deal. I don’t want any more plugins. I don’t want proprietary players and I don’t need any more music player software… I just want to download my tracks and use them how I want with the software I want! Especially when what I’m installing does not work…

Sorry Nokia – although it looked promising …20 minutes later and I still haven’t been able to listen to anything…you just lost me.