My iphone ran out of battery last night … pesky thing. I’m too impatient to wait and see if Steve has a solution to this problem so I started searching. Anyway, I stumbled across this piece of innovation: a phone that runs on pepsi … well any fizzy pop.

This little beauty is made possible thanks to a bio battery:

Bio battery has the potential to operate three to four times longer on a single charge than conventional lithium batteries and it could be fully biodegradable. Meanwhile, it brings a whole new perception to batteries and afternoon tea.

Yet more Twitterhugs: Pepsi’s followfriday to Coke. Microsoft and Linux tweet each other.

@PepsiCanada joins in the spirit by recommending @cocacola with a #followfriday retweet from @LauraRmz who recommended ALL the cola brands in her tweet. Meanwhile @Linux and @Microsoft get in on the action (below).

Whilst certain onlookers remain cynical there is no doubt that this ‘Twitterhugging’ between rival brands is demonstrating new types of interactions that would certainly never have occurred without social media. All up, it’s got to be a good thing, don’t you think? 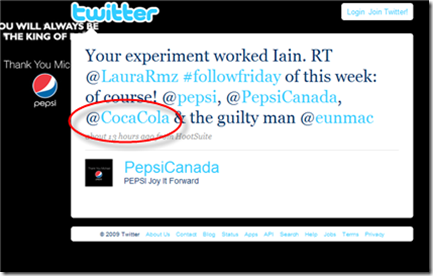 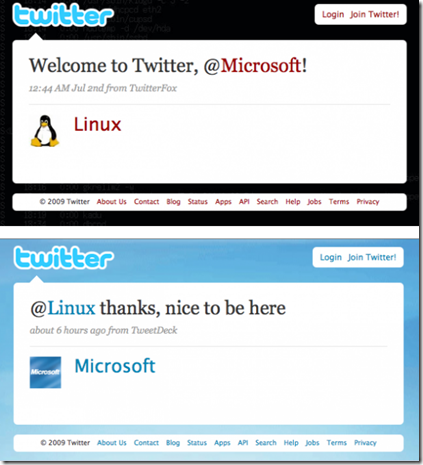 From a genuinely random and spontaneous twitter experiment (here) that led to Coke and Pepsi becoming ‘friends’ on Twitter there’s been a fair bit of press coverage. Nice to see Biz Stone, founder of Twitter tweet it out too (here).
Maybe Twitter Hugs are something we’ll see more of in the future.
Adding links below as they come in:

Above: The original tweet from Coke to Pepsi:
Below: Pepsi says Hellooo back to Coke. 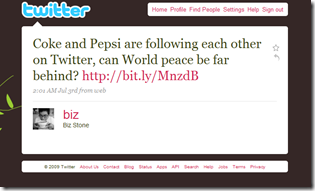 Pepsi and XBox asked Amnesia Razorfish to create a competition where Pepsi and Pepsi Max drinkers can win an XBox 360 console and Gears of War 2 game every day just by naming a new soldier for the game.

So get chugging some Pepsi and start naming your army…..hmmm…..Colonel Cold Mountain, Stealthy Surfer, Major Malfunction….this may take some time.

Go to pepsi.com.au and click on the feauture link to get your entry in!

New Pepsi Can and logo

Pepsi have launched themselves into the social media arena in the US, choosing to announce and show the new can/brand ID online. “You heard it here first” on http://friendfeed.com/rooms/pepsicooler being the quote from Peter Shankman (here) in the feed.

Steve Rubel who had helped Pepsi launch this outlines (http://www.micropersuasion.com/2008/10/join-us-in-the.html) the effort was done to promote ‘two-way dialogue and collaboration’ and was timed to coincide with the launch of the new Pepsi brand identity (http://adage.com/article?article_id=132016).

This is pretty big news as far as we’re concerned as the marketing beast Pepsi show their faith in digital as the medium of choice for the launch of their new brand, and social media as the channel. This is the first change to their identity since 1987.

From the Vault – a practical joke soundboard from Pepsi where you pretend to be someone else. Now, we still use this… it is really funny and also kind of handy – we think this is still probably one of Amnesia’s best digital campaigns over the years (note: the soundboard is just a small part of the Office Pranks Website).

Legend has it that one of Amnesia’s producers fooled his wife so badly with this soundboard he ended up on the couch for a night. No names mentioned.

Instructions: Simply call a friend on speakerphone (with PC next to you, speakers turned up) and press buttons on soundboard at the right moment (practice for a couple of minutes b4 you call) … There’s two characters to choose from… They’ll never guess what’s going on 🙂

Old archived Office Pranks website here (has a few broken links so please forgive any niggles. Note this site exists for portfolio purposes and is not attached to any current Pepsi marketing).